‘This post is a part of Write Over the Weekend, an initiative for Indian Bloggers by BlogAdda’. 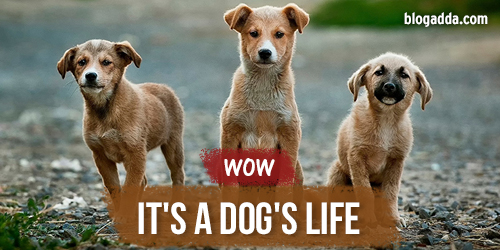 It is almost midmorning. I haven’t seen Momma yet.

Daddy had left for office, at his usual time, giving me a mighty kick, on his way out.

Momma’s bedroom door is still tightly shut. Seasoned as I am, I don’t disturb her. But my sixth sense says, she is Ok, just hurting. A lot! But that is nothing out of the ordinary.

Suddenly the door opens, Momma comes out, scoops me up and mutters incoherently.

“Come on Sheru, let us go and indulge ourselves in a much needed mani-pedi session.” She then bundles me up and starts the car.

I look at her. Behind those gigantic glares, I know that her eyes would be puffed up, carefully camouflaged with eyeliner and mascara. Her quivering lips sporting a blood red, start muttering again.

“You know Sheru, he isn’t a bad guy. He provides for me.  He never hits me. He just loses his temper and says vile things. But that is stress you know, all his work makes him volatile!”

I say nothing. The incongruity of calling a pint sized me, a Sheru, hasn’t hit her so far. When will she see the truth that stares at her, right in the face?

My mother, Moti, Momma’s earlier pet, used to tell me that Momma was the life of her family, raised as a princess. Momma’s father and Daddy’s father were business acquaintances who wanted to take their friendship to the next level. They solemnized  their children’s marriage, in a grand ceremony, which became the talk of the town. Daddy wanted to marry someone else but when his father threatened disinheritance, quietly married Momma. He now takes his anger out on Momma.

But what I fail to understand is why does she take it? What terrible fate is she afraid of? Does the fear of unknown make one settle for known misery? Why does she not leave him and go back to her parents’ place? I remember, Momma talking to her parents, who suggested to her to work on her marriage, use her charms, win Daddy over. He was a catch you see. Daddy lost his cool at times, that’s it. No big deal! Daddy was to be Momma’s only goal.

After this sermon, vivacious Momma had become very quiet.

Her parents would often send costly gifts to fill up her home.

Instead, they could given her the needed courage to walk out and rebuild her life.

I am an animal, I can understand this much. Why don’t humans then?

And they call mine, a Dog’s life!

I am loyal. So, I go silently with Momma to all her mani-pedi sessions, hoping one day, she will wake up and walk away from this mess and find her destiny.

Till then Wuff Wuff!