When Sadiqa Peerbhoy said this to Akka-Acerbic –

‘What a sensitive and perceptive questionnaire! It made me rethink the book completely. Half the things you asked about I think I was not even aware when they crept in in the flow.‘ What an indulgence!

It is time to do the Happy Dance 😀 Read on!

‘House of Discord’ by Sadiqa Peerbhoy published by Readomania

A layered, riveting narrative that brings out the angst of a breaking dysfunctional family with the background of a burning Bombay. Because a crumbling city is an extended metaphor for a kin with conflict and change is the only true consort of life. 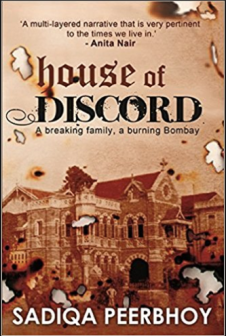 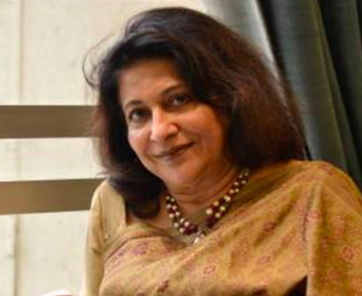 1) The tough matriarch and the effete father are so relatable. They could be a part of any household or city. Why did you choose Mumbai (Bombay) and juxtapose the domestic squabbles with the riots? Because riots were rare whereas discord a regular feature.

Sadiqa: Mumbai is a city I grew up in and am very familiar with. It was for decades the only city in India where religious and racial tolerance ruled even when the North was in the grip of communal dissension. Bombay’s cheek by jowl apartment living promoted a cohesiveness and its commerce, business, and Bollywood glamour attracted people from all over India who then blended into its ethos.
Riots were relatively unknown in Bombay and when they did occur they caused fissures so deep that the effect still lingers. As I was attempting to locate the Deshmukhs where the outer discord was a reflection of the inner discord of the family I chose a city that I feel deeply for.

2)There are no villains or heroes in your novel, except the circumstances, which in turn bring out the best in each person. Out of the spectrum of characters you have created, who do you like the best? Why? And in hindsight, who do you think should have been fleshed out better?

Sadiqa: I do have a soft spot for Lokeshwari because I have known someone very like her. Her circumstances molded and shaped her. The weaker her husband got, the stronger she had to become to her own cost. The dynamics of that relationship was very interesting to explore. I also like the feisty Dhonduram. Since there are so many characters it was not possible to do justice to all but in hindsight, I think should I have given Adam more of a role in the family troubles and the denouement.

3) Please tell us more about the resident ghost. What rather who is the inspiration?

Sadiqa: The ghost is a young girl who died of heart failure and her presence is benign and reassuring for the family in troubled times. Perhaps she is a symbol of Barrot House itself clinging to times past and not letting go in the face of change. She is there for the romance and the touch of magic and gives venerability to a homestead that has seen so much that it is almost a character that faces the inevitable end of the road as all Bungalows fall into sighing debris sooner than later.

4) If the story were to leapfrog two decades hence, would the spinster daughter behave differently? Would she still wait for a groom to save her?

Sadiqa: Sarita is not just an old-fashioned girl. She, along with the others, is broken into submission by her all-powerful mother. Besides she is beset by several handicaps in the form of her scar and limp and stuttering so that whether it is 1900 or 2020 she would still lack the gumption to take her life in her own hands.

5)All things were transient. Change – the only true consort of life. What is one thing that you hope, that the reader definitely should surmise, after reading ‘House of Discord’. What is the underlying thought?

Sadiqa: Now that I go back and read the book I find a number of threads which came in unintentionally perhaps. The biggest take away is that trust and belief can overcome years of suspicion and shored up anger that can distort relationships. Also, that change is sad but inevitable and has to be accepted and adapted to for survival or you get crushed by its Juggernaut. The most obvious plea is for communal harmony in a city whose ethos is that of tolerance and acceptance of all who come to its shores.

6)How long did you take to write ‘House of Discord’? Are you a pen and paper person? Or do you start pounding on the keys straightway?

Sadiqa: I write for about three hours in the mornings from 9 to 12..sometimes more when I am in the throes of finishing a book. Sometimes I write mentally in wakeful nights and then I am raring to hit my desk before it all vanishes. I enter straight in Microsoft Word- mostly a jumble of words and higgledy-piggledy sentences then correct them later. The editing is a long back-breaking process but the writing is fun as characters take on a life of their own and grow.

7)Do you feel that times have changed since 1992? For the worse or for the better? Does the famed spirit of Mumbai exist, any longer?

Sadiqa: I feel Mumbai has changed for the worse. It was always a money-driven city but it had a heart and a soul and a certain zest for life that left no room for people to recognize and define their differences. Mumbaiwallas were Mumbaiwallas and proud to be so despite the hard life of commuting, traffic, dirt, grime and the relentless monsoons. Now the fissures are very obvious. The much-lauded Spirit of Bombay is now more about survival and getting on with it rather than survival together as one people.

8) Are you a feminist? How do you imbue your write-ups with your belief system? Is it in your face or you would like the reader figure for self?

I am not a feminist at all. I glory in being a woman and enjoying my roles at wife and mother. I have never felt the need to be aggressive about my rights because I can get a more than level playing field through grace an charm…now dignity. My belief system seems to enter into my writing without a conscious effort. It comes from loving my characters so much that I want them to win and not have anything horrible happen to them.( I could not bear to let Lily get raped so she escaped the obvious)
I think, letting the reader absorb the underlying philosophy has far more impact. However, in HOD I do end by mentioning that the family is a metaphor for the city for the less perceptive reader because I do so want the torn fissured Mumbai to go back to being a family again.

9) What is your writing routine? What would be your message for young budding writers? How important is reading to improve one’s nascent craft?

I write from 9 to about 12 every day. It is important to stick to it even when going through a blocked phase. I have times when I get disgruntled and want to erase everything I have written. But reread after a few days later it does not appear quite so bad. I want to tell budding writers to suspend their critical faculties and withhold judgment till it is all over. We are not always the best judge of our writing…nor are most publishers who have an eye on what is saleable at the moment than good writing.
It is very very important to read far more than you write! Good books, bad books even tripe ….so you know what not to do. Good writing is the university that hones and inspires young writers. And nor should they to be disheartened with rejection. Just think that publishing is a harsh business and rejection just means that their name is not saleable yet.

3 thoughts on “House of Discord by Sadiqa Peerbhoy”